My Life of Crime

I'd been reading Tyler C. Gore's "My Life of Crime", a series of autobiographical essays one of which, "Appendix", is novella length, and I noticed an odd effect. While scanning the perfectly ordinary looking lines of ink pressed into paper I found I was laughing. Laughing at a book. A modern book. 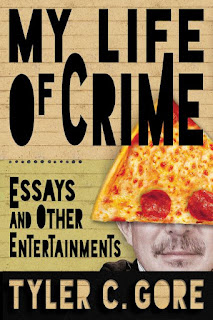 This never happens. I regularly ask for recommendations of funny books from friends or random strangers but I'm always disappointed by their choices. They're not funny. At best they're mildly amusing. Ordinarily they're dry as my tongue in the morning. But I persevere because why shouldn't there be funny books? I like reading and I like laughing. There must be a way of combining the two. They still have funny films and TV and even plays. Stand Up Netflix specials seem to be about the most lucrative things on the planet. Ricky Gervais comes out, tells us he's not allowed to say anything anymore and that we should love animals instead of people - Morrissey in a tight black vest - and it's another squidillion in the bank for the portly ex-Suede manager. Thank you, and good night.

But books? Not books. Books aren't funny. They're SERIOUS LITERATURE. There's a "humour" section in the bookshop, but it's all toilet books and stocking fillers: small hardbacks featuring photos Australia's worst "dunnies", brainless satires about Trump and Johnson, or Jeremy Clarkson's latest will-this-do-invoice-attached opinion pieces stretched into paperback, and all so Dad can have something to concentrate on during the lengthy, bum-numbing voiding of his Christmas dinner. I suppose you can wipe your arse with them at a pinch.

But actually funny books? The last book I found funny was "The Stench of Honolulu" by Jack Handey, but that came out nearly a decade ago and that's a long time between laughs. But now here's Gore's "My Life of Crime", and it delivers yuk yuks aplenty and much more, including the most spirited and moving defense of cat ownership I've ever read.

Gore and his cat Luna's bodies collapse at the same time, and while the writer can rely on medical science to deliver him into a series of humiliations - including a semi-conscious roughing up by Blaine* from "Pretty in Pink" - Luna is subject to the ministrations of Gore and his wife Natasha, while New York is swallowed by a blizzard. It becomes clear that while Luna has the grace and dignity native to her species, Gore is afflicted with the shame and degradation of his own. There's a fair amount of "body wastage" in these stories, but it's never gratuitous or gross-out. It displays the dismantling of the human social construct, how helpless and pathetic a peeled human being in an unfamiliar environment truly is. At our weakest and most powerless we are obliged to rely on the kindness of strangers. Tyler's a cool guy. His hipness, his cultural awareness is his armour against the vicissitudes of life. He's the wise-ass in the corner of the bar, snark and cigarettes playing about his lips. But this is punctured savagely when his appendix explodes: opioids place uncertain time periods between his witticisms and the events that inspired them. He is denuded, rendered unconscious, prodded and poked - its like a day in the life of a mussel or a porn star. Gore writes beautifully about this indignity. He is never saintly, never playing out victim-hood. His leering is constant even at his most abject - he's at pains to point out how attractive he finds every single female member of the medical profession, even as they are fitting a catheter or exploring his rectum. His acknowledgement of these women, impossible Amazonian figures, medicating angels, is set against his own feebleness, his pathetic weakness. They are taciturn Goddesses next to him - he has no choice but to worship them. He is wretched before them.

He later claims that it's the effulgent glow of their youth he's glutting on, like Nosferatu with his junk hanging out. Sure, Tyler, sure.

I loved this book. There is a magnificent sweep of detail here: Gore's obsessions and irritability, his disinclination to do what he's told even in his own best interest. We get local politics, the horrors of the American healthcare system and the prophylactic bubble that protects him as he negotiates it, as Natasha is a big cheese in the Hospital. We get a feeling for the teeming city he calls home and the naked-and-afraid body horror of being contained in a monstrous institution in a powerless state. We get all this and we get Gore's comic voice: wry, irascible, opinionated and pedantic, but shot through with love for his wife and his cat and, occasionally, a really nice pebble.

*"Blaine? What is that? A major appliance?" 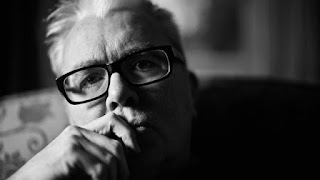 Valuable Lessons from a Master of the Craft...